Passwords. The bane of my existence. Can’t they all just get along? Did that password start with a capital letter or was it lowercase? Was it an exclamation mark or an asterisk? Millions of consumers each year inadvertently forget their passwords, sending them down the password reset process. It typically consists of a one-time passcode (OTP) sent to the consumer’s mobile number they have on file, who then must validate it before they are authorized to change the password.

When we left off from my last blog in this series, I made the argument that SMS out-of-band authentication (OOBA) is far from dead. In fact, it continues to have a worldwide market, encompassing a number of different industries and verticals, including financial services, healthcare and e-commerce. According to an Allied Market Research report titled, Global Out-of-band Authentication Market, 2017-2023, “The global out-of-band authentication market generated $274 million in 2016, and is projected to garner $1,143 million by 2023.1”

However, not all SMS OOBA solutions are created equal, which is where we’ll pick up from the previous conversation. With so many threats affecting the digital and mobile channels, including malware, man-in-the middle fraud, spoofing of phone numbers, and SIM swaps, it’s becoming increasingly difficult to confidently authenticate a customer in the digital space. As mentioned previously, these very threats and vulnerabilities led the National Institute of Standards and Technology (NIST) to update its Digital Identity Guidelines in June 2017, including updated OOBA rules. Most notable, senders of OTP’s “SHALL verify that the pre-registered telephone number being used is associated with a specific physical device.2”

Having the ability to do a little private investigation on your customer’s information directly with the carriers BEFORE sending the SMS is strongly recommended and frankly, a “no- brainer.” An ounce of prevention is really worth a pound of cure. Verifiers need the ability to fight against account takeover attacks and other fraud threats that target their customer’s accounts.

At the end of the day, these types of services help you answer the question, “Should I even send this OTP to this phone number?” The assumption is that the phone number you’re sending to is in possession of your customer. But what if it’s not and you knew that? Would you still send the OTP? Likely, you would not.

The takeaway from both of these blogs is simple; know before you send that SMS with added confidence that you can associate the OTP with your intended recipient. Be sure to stay ahead of the fraudsters, keeping both your company’s reputation intact AND your customer accounts protected.

Join us for our upcoming webinar on this topic

Register below to hear more about current fraud trends impacting the digital channel and how MNO intelligence is helping companies combat these types of threats. 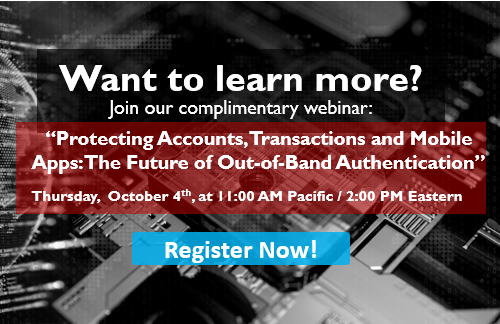